Everyone knows the game roulette, but not many people know where the famous casino game originates from. In this article, we give you an overview of the history of roulette. Let’s start with the man who invented the first version of roulette, Blaise Pascal.

Blaise Pascal, the man who invented the first version of roulette 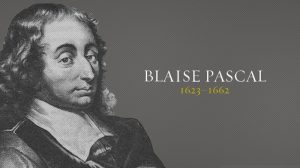 Who is Blaise Pascal?

Blaise Pascal was a French mathematician, physicist and religious philosopher, who laid the foundation for the modern theory of probabilities.

Mathematician Blaise Pascal was born on June 19, 1623, in Clermont-Ferrand, France. In the 1640s he invented the Pascaline, an early calculator, and further validated Evangelista Torricelli’s theory concerning the cause of barometrical variations. In the 1650s, Pascal laid the foundation of probability theory with Pierre de Fermat.  He died in Paris on August 19, 1662.

Blaise Pascal introduced a primitive form of roulette. The design of this game shows direct similarities with his proposal of the roulette wheel in his search for the so-called perpetual motion machine (a machine that can work indefinitely without an energy source). How the wheel is actually put in the game is still unclear.

In its current form, we recognize roulette originating in 1796 in Paris. The European variation of roulette is often called French roulette.. This is a rather flustering fact, seeing as that the European roulette as we know it arose in Germany.

An early description of the roulette game was found in a French novel named ‘La Roulette, ou le Jour’, by author Jacques Lablee.  Jacques Lablee described the origin of roulette to be a roulette wheel in the Royal Palace of Paris in 1796. The description goes as follows, “There are exactly two slots reserved for the bank, whence it derives its sole mathematical advantage”. Rather ironically, this French description is of roulette that we would now call American roulette, with two zeros. The novel was published in 1801.

The roulette wheels that were used in the casinos of Paris in the later years of 1790 only had one zero in front of the red numbers, and the double zeros in front of the black numbers. To remove confusion, they decided to change the colours of the zero’s to green around the 1800s.

The origin of the Single Zero (European Roulette)

In 1843, the wheel with a single zero is introduced in a German casino in the city of Homburg. This was introduced to compete with the casinos that used the double zero version. This was the origin of the European roulette that we know now.

A quick video documentary about the origin of roulette: In the 19th century, the game roulette spread through all of Europe and was brought to the USA, where it became one of the most famous and popular casino games. When the German government forbade gambling around the 1860s, the de Blanc family moved to the last legal place for casinos in Europa: Monte Carlo. Monte Carlo thus became the gambling heaven for the elite of Europe. Even now, the casino of Monte Carlo has remained the most famous and largest casino in all of Europe.

The European roulette game spread over the rest of the world. Countries that have maintained the American roulette version are the USA, Canada, South America, and the Caribbean.

The history of Roulette: The invention of the zero

The invention of the zero – we are not suggesting that the number zero didn’t exist until the 1800s – is a good anecdote in the history of roulette. The zero did not exist on the wheel until the middle of the 19th century. The original roulette wheel, the one invented by Pascal Blaise, has stayed the same throughout the centuries. This changed in 1842, when Francois and Lois Blanc designed a roulette wheel with only one zero, exclusively for King Karel (Charles) III of Monaco. This brought up quite an uproar since the double zero brought the benefit to the house.

Charles thought to make money by building a casino in Monaco. This is to bring attention to this new wheel. The wheel generated a high amount of income for Monaco and quickly became an important symbol for Monte Carlo’s culture of upscale gambling.

The French-American relationship in the 18th century was a significant factor in the history of roulette. Especially after the French Revolution in 17890 where many Americans looked up to, leading to many Americans visiting France. In the 1800s, roulette is carried across the great ocean and brought to the American coast. To give the American casino house the greater advantage, however, the wheel is given an extra zero. Until now, the American version of roulette still uses the double zero to the house’s advantage.

Roulette: the past, the present, and the future